Torii shrewdly borrows stylistics and bends them to its whims, like on the sweltering soul melodicism of ‘Heat Lightning’, which thrillingly accelerates into a motorik-indebted slipstream.

Many thanks to Spotify for placing the track in New Music Friday, and all other radio stations, blogs and playlists who have shown their support.

The album release show in Amsterdam, plus shows in Utrecht and Rotterdam have just been announced: 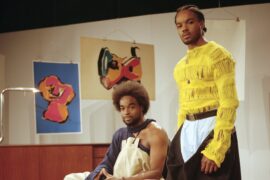